The UK gave us Christopher Kane and now there’s another Kane on the scene, Sanchez-Kane. Shoutout from Latin America to the world, (Pa’l mundo) she’s bringing us her passion for cultural identity and some 90’s/queer-ish makeup style. But we are not here to talk about folkloric styles, we are talking about «haute couture de barrio» and «prêt-à-porter tu madre» (like she states in her t-shirts).

Get ready for a bizarre male style with a ladylike touch because we would like to introduce you to a designer with ovaries (because having balls is just not enough)! She questions the world with what is politically correct. She is Barbara Sanchez-Kane, the Mexican mastermind behind the fairly new brand which inherited her last name. After her shows in Los Angeles and New York, she became a good example of the popular saying «no one is a prophet in their own land». Mexico lindo we thank you for the guacamole and for the sentimental macho style that Sanchez-Kane is putting out there.

Following her since the beginning of her career two years ago, we were more than excited to be at her A/W 2018 fashion show in New York. The semi-naked dudes dancing around the giant penises in the middle of the runway, for sure turned on the crowd. But not us, we really focused on the deconstruction of the suits, the graphic jewelry in form of open legs and the condoms used to style the hair.

We were hypnotized by the beauty of the models, especially by the grandpa walking the runway to the sound of «Yo no naci para amar» by Juan Gabriel. This is not just about clothing, this is a story of fashion, culture and self-expression told in front of a lot of cameras, around journalists, bloggers, celebrities and even those who managed to sneak in!

You have to behave well this year so maybe the universe will give you one of her pieces. In our wishlist are one dark tartan suit/dress, one «free the nipple shirt» and a pair of Chicano boots with a metal detail in form of a boot, of course.

Nevermind we want it all, including the twin models. 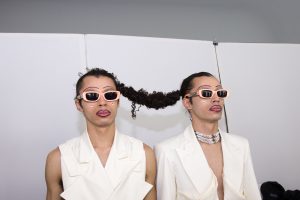 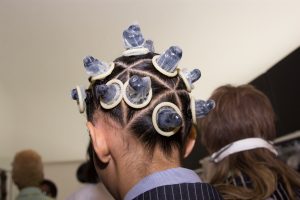 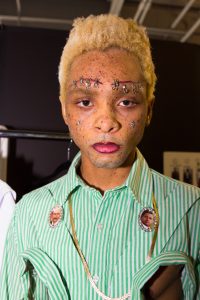